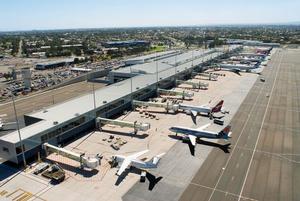 Adelaide Airport has announced what it says will be one of the largest rooftop solar systems in Australia.

The airport authority will install a 1.17 megawatt solar PV system, to be built across 8000 square metres of the airport’s short-term car park roof.

It is expected to cut energy use and carbon emissions by 10 per cent. Construction on the new solar system is expected to start in December and be completed by April 2016.

It represents a 1000 per cent increase in solar energy capacity for the airport, and makes it the largest private-sector solar system in South Australia.

“This solar system significantly reduces our energy consumption, while assisting the state government in achieving its renewable energy targets.”