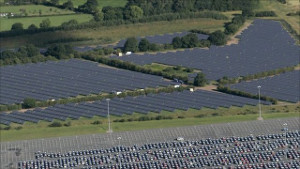 New analysis reveals that UK manufacturers have increased their investment in commercial-scale on-site power generation by 36%, compared with last year.

Prompted by concerns over rising energy costs and security of energy supply, the latest Energy Entrepreneurs Report, compiled by SmartestEnergy, finds that an estimated à‚£53.3 million (US$91.4 million) has been invested in 38 new projects since last year’s report ” more than à‚£1 million a week ” taking the total invested in recent years up to à‚£164.3 million.

In total, there are 144 sites of 50 kW capacity or more operating in the UK with a combined capacity of 362 MW.

According to the report, the most popular technology was solar photovoltaics which accounts for 30 of the new projects with the remainder using onshore wind, biomass and anaerobic digestion.

The analysis cites the example of a 17,000-panel solar array at Toyota’s site in Derby (pictured).à‚

Iain Robertson, head of generation for SmartestEnergy, said the report highlighted the changing approach to energy being taken by many businesses. ‘These projects can deliver significant savings in energy costs, ensure continuity of supplies and also provide a new income stream from energy generated over and above the needs of the business.’

Robertson added: ‘Consumers are also increasingly interested in the sustainability of companies whose products they buy and investing in renewable energy can be used to highlight environmental credentials.’