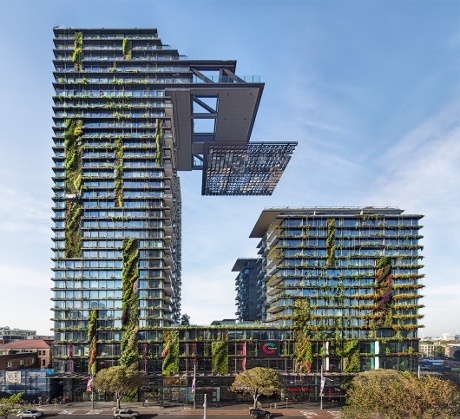 The newly awarded best tall building in the world, located in Sydney, Australia, is backboned by trigeneration and on-site solar technology.

The residential building, One Central Park, designed by French group Ateliers Jean Nouvel and Australia’s PTW, beat 87 other international entries to top the list, and was commended for its visible use of green design.

The award was given by the Council on Tall Buildings and Urban Habitat (CTBUH) based at Chicago’s Illinois Institute of Technology in the US.

As well as its trigeneration power plant the building also integrates a cantilevered heliostat, and an internal water recycling plant.

The building’s trigeneration plant is due to be fully completed in November 2015 and it is estimated to save the equivalent of 136,000 tonnes of greenhouse gas emission over 25 years.

In terms of on-site solar power, One Central Park contains a cantilever covered in a series of reflector panels. These panels automatically redirect natural sunlight to various parts of a nearby park during shady periods of the day.

Completed late 2013, the 623 apartment building is just one part of a $2bn mixed-use development precinct. Central Park is a joint project between Frasers Property and Sekisui House and is located in a part of inner Sydney undergoing major revitalisation.

The building’s win comes after picking up overall winner at the 2014 Leading European Architects Forum and being voted fifth best skyscraper by construction data company Emporis earlier this year.