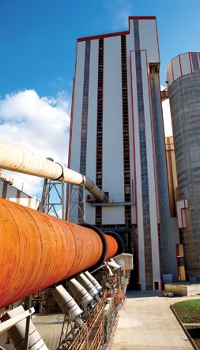 In a bid to quickly boost its production capacity in preparation for the Sochi 2014 Winter Olympics, the Verhnebakanskiy Cement Plant in Novorossiysk, Russia is expanding its 44.3-MW on-site power plant with the addition of a new GE Jenbacher J624 gas engine.

à‚  The Verhnebakanskiy factory was upgraded in 2011 with a new production line and is now the largest cement manufacturing facility in Russia, producing 2 million tonnes per year.


à‚ As part of the upgrade, the factory installedà‚ 11 4-MW Jenbacher J624 units, making it the first containerized J624 generator set project in the world for industrial on-site power, and the largest J624 power plant in the world. à‚

à‚ The addition of a twelfth gas engine will help the plant reduce its natural gas consumption as well as boosting capacity, GE said.

à‚ According to GE, one J624 unit can meet the power needs of about 9000 European households.