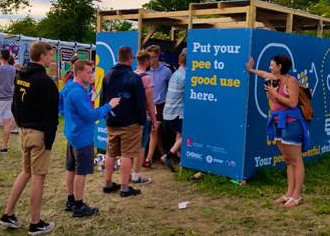 A major music festival in the UK is to get an on-site power boost from its urinals.

The five-day Glastonbury Festival, which has an average attendance of 175,000, kicks off this week. Near one of the main stages will be a 40-person urinal that will use festivalgoers’ waste to power informational displays, while a smaller urinal near the press area will power lights and charge mobile phones. à‚ à‚

Developed by scientists at the University of the West of England’s Bristol Bioenergy Centre (BBiC), part of the Bristol Robotics Laboratory, the so-called Pee Power system will take in an estimated 1000 litres of urine per day to feed a microbial fuel cell (MFC) stack, which generates electricity by converting the biochemical energy generated as live bacteria consume organic waste.à‚

Although the technology has been demonstrated at two previous Glastonbury festivals, for this year’s installations the BBiC said it will need to construct its largest-ever fuel cell stack and will need to outsource its construction for the first time.

The team will next move on to phase two of the project, which is supported by an initiative of the Bill and Melinda Gates Foundation aimed at creating the next generation of sanitation technologies. Phase II aims to develop MFCs into a mature technology.

Professor Ioannis Ieropoulos, head of the BBic, said the Glastonbury installation is “primarily about public engagement and Glastonbury Festival gives us the chance to showcase our technology to potentially thousands of people. The [display featuring] festival updates are one way of showing that Pee Power and the microbial fuel cell technology can be developed for a whole range of uses.”