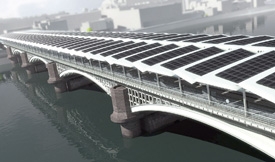 A railway station in London, UK is now powered by on-site renewables.

Solarcentury‘s 1.1-MWp solar bridge over Blackfriars station features 4400 photovoltaic panels in a 6000 m2 array, making it the world’s largest solar bridge. It generates 900 MWh per year and will provide 50% of the station’s energy as well as reduce CO2 emissions by an estimated 511 tonnes per year.

The bridge was officially launched this week, as commuters were greeted with a cup of tea from ‘Britain’s biggest cup’, at 3.1 metres tall and 2.1 metres in diameter, powered by the solar array.

The solar bridge is part of a larger station upgrade, which itself is part of a à‚£6.5 billion (US$10.8 billion) programme to modernise the rail route through central London.