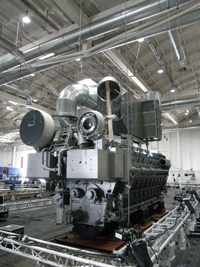 A new Saudi Arabian cement production facility is to be powered by an on-site diesel power plant.

The 54.5 MW plant, to be built by German engine manufacturer MAN Diesel & Turbo, will use five of MAN’s 20V32/44CR engines to power the United Cement Industrial Company’s new cement works, located 160 km south of Jeddah. The facility is planned to produce around 5000

tonnes of cement per day.

The Jeddah area is hot and sandy, with temperatures reaching 50° C in summer. The power plant’s system design has been optimised to accommodate these conditions, MAN said.

Dr René Umlauft, MAN’s CEO, commented, “We believe there is tremendous potential in the domain of local power plant solutions for independent energy generation in particular, for example for cement or steel works.”

Construction is set to begin in the autumn of 2013, with the engines to be delivered in mid-2014.