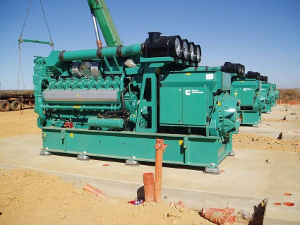 The project is currently coming on stream, when it will produce up to 12 MW of electricity, 10 MW of which can be exported to the grid. Fuelled on biomass waste, the project is being developed by Cummins Cogeneration Kenya Ltd (Cummins CK), a joint venture with Gentec Energy.

The Baringo project is an important step for Cummins CK for long-term expansion, the company says.

Cummins CK Managing Director Yash Krishna explained: ‘Besides jump-starting the local economy by bringing employment to a marginalized population through utilization of an invasive weed, the Baringo project will also showcase the producer-gas engines developed by our parent company, Cummins Power Generation.’

A follow-up project elsewhere in Kenya will also use a combination of agricultural residues to generate power, and a 1.2 MW plant project has already begun in Zambia.