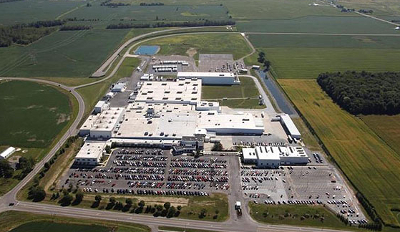 Honda Motor company has become the first major automotive factory in the US to get a substantial amount of its energy from on-site wind turbines.

The site at Russells Point, Ohio is being powered by two wind turbines provided by ConEdison Solutions.

The 1.6-megawatt General Electric Co. (GE) turbines went into operation this week at the factory, according to a statement. ConEdison Solutions owns and operates them and Honda is buying the electricity under a long-term contract.

Honda is one of a growing number of industrial and commercial customers opting to have their electricity generated locally and buying less from utilities.

Honda estimates the turbines will supply about 10 per cent of the factory’s power and will help the company reduce global greenhouse-gas emissions. Excess electricity from the turbines will be provided to the auto plant’s neighbours.

The turbines were developed by Pipestone, Minnesota-based Juhl Energy Inc. (JUHL) according to Bloomberg News.