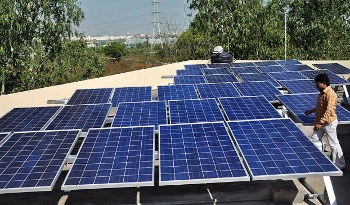 The plant represents a first of its kind initiative and Delhi Metro Rail Corporation (DMRC) welcomed Urban Development Minister Venkaiah Naidu at the Metro Bhawan, New Delhi in the presence of, among others, Union Minister of State for Power, Coal and Renewable Energy, Piyush Goyal, to the inauguration of the facility.

The power generated by the 500-kWp rooftop-solar power plant will be used to meet the requirements at the station. The roof-top plant is the largest of its kind in Delhi-NCR under the Renewable Energy Service (RESCO) model and is a result of cooperation between DMRC and Deutsche Gesellschaft fur Internationale Zusammenarbeit (GIZ) through the project ‘ComSolar’, which supports commercialisation of solar energy in India.

As per the model for the roof-top plant, the developer invests, owns and operates the plant while DMRC purchases the electricity generated through a Power Purchase Agreement.

The German government involvement has the aim of supporting the New and Renewable Energy Ministry in achieving its targets under the Jawaharlal Nehru National Solar Mission.

DMRC is to install three more roof-top solar power plants at facilities under it in continuation of its policy to encourage eco-friendly practices and technologies. These plants will be located at Anand Vihar ISBT Metro, Pragati Maidan Metro and the DMRC residential complex at Pushp Vihar and will have a joint power generation capacity of 25-kWp.

New Delhi’s administrators have shown themselves to be progressive in the area of on-site power with the main New Delhi rail station also earmarked for on-site solar power.