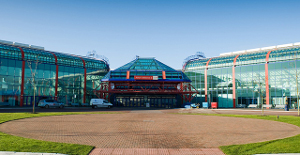 Construction began on the £13 million ($20 million) anaerobic digestion facility in 2014 and the plant is expected to produce some 17,000 MWhe annually.

With a capacity of 48,500 tonnes per year of food waste, which will produce methane for use in two Jenbacher 4 Series engines with a capacity of 1.2 MWe each, heat from the facility will be used in the digesters to maintain them at around 40ºC as well as in a pasteurisation process for the digested food waste which is used as an agricultural product. Clarke Energy supplies the engines while the EPC contractor was Agrivert Construction. With the commissioning of the project, the site will be totally self-sufficient for its electricity and heat needs.

The UK’s National Exhibition Centre (NEC, pictured), located near to the Coleshill site, has become one of the first local businesses to send its food waste to Severn Trent Green Power’s plant.

Brian Pell, the NEC’s director of operations, said: ‘Severn Trent’s site is right on our doorstep, less than four miles away, so it provides us with the perfect location to send our food waste. This year, we expect to send around 120 tonnes of food waste to Coleshill.’