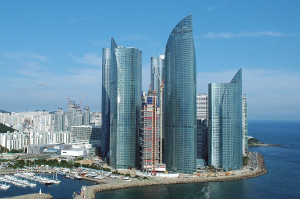 A new residential complex in Busan, South Korea‘s second city, is to be power with on-site combined heat and power fuel cells. Under the terms of a new deal between Samsung C&T Corp., based in Seoul, Korea Hydro & Nuclear Power (KHNP) and Doosan Fuel Cell, Doosan will manufacture and ship 70 fuel cells that will produce 30.8 MW.

The fuel cell systems will be used to heat and power as many as 71,500 Korean homes. Samsung will serve as the engineering, procurement and construction contractor while KHNP and Busan will share ownership of the fuel cells.
à‚

Doosan is due to begin shipping PureCellà‚® Model 400 power plants this year and complete the delivery by August 2016. The fuel cells are scheduled to go live by February 2017.