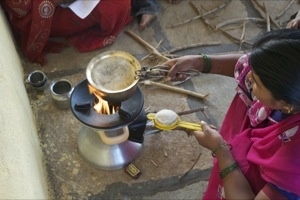 A biomass cookstove that generates on-site power is to be demonstrated this year in commercial pilot programmes in India, Ghana and Uganda.

The HomeStove converts waste heat to energy using a patent-pending thermoelectric generator, while a USB port enables its user to charge small items such as mobile phones and LED lights. The stove’s creator, US company BioLite, says it also reduces harmful smoke emissions from open-fire cooking by 90% and uses 50% less woody fuel than traditional cooking methods.

BioLite says its target market is made up of the 3.1 billion people worldwide who cook over open fires, and especially the 1.3 billion of those who rely on mobile phones for communication but lack access to electricity. The company began an initial distribution programme earlier this year, working with rural energy suppliers in India and Africa. Its goal is to supply more than 1 million homes over the next five years.à‚