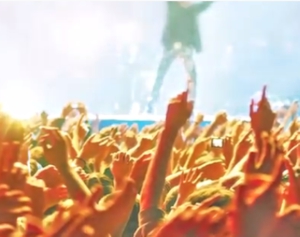 The company said the festival has been supplied with biodiesel-fuelled generators since 2009 after a request to use renewable power.

The 230-generator on-site fleet used more than 60,000 litres of hydro-treated vegetable oil (HVO) to power the event, and included lithium battery storage hybrid systems. The fleet was monitored using a telemetry system, which Aggreko said served the dual purpose of ensuring reliability and helping the festival to monitor detailed power use around the site.

The company said it hung 50 km of low energy LED festoon lighting for the first time this year, as well as site lighting with time clocks to reduce the power requirement during the day.

The power supply infrastructure took a month to set up and required a team of 90 at its peak, Aggreko said.

This year’s Glastonbury also featured an experimentalà‚ power boostà‚ from the University of the West of England’s Bristol Bioenergy Centre (BBiC), which installed a 40-person urinal that used human waste to power informational displays and a smaller urinal near the press area that powered lights and charged mobile phones.