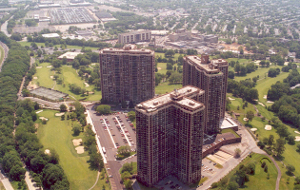 North Shore Towers, a luxury co-op community based just east of New York City, has partnered with GI Energy to complete a US$13 million upgrade of its 43-year-old combined heat and power system.

Originally installed in 1971, GI Energy was contracted to replace three of six generators and associated electrical and heat recovery equipment at the CHP plant, while maintaining continuous operation of the entire complex. GI Energy teamed with Caterpillar distributor, H.O. Penn Machinery, to install three natural-gas fired reciprocating engines totalling 4.8 MW. Additionally, the team replaced the cooling tower and installed a new gas compressor and heat exchangers. These upgrades increase overall efficiency while extending the life of the plant by an estimated 30 years.

The complex of three 33-story residential buildings uses the existing CHP system to provide all of the heating, cooling, and electricity with no backup from the utility. Following the upgrade the cost of maintaining the system will be cut by almost 40%, its developers say.

‘By switching the system at North Shore Towers to natural gas we can increase the resilience of the heat and power supply, while cutting running costs and emissions,’ stated Amir Yanni, Senior Vice President of Construction and Project Management at GI Energy.