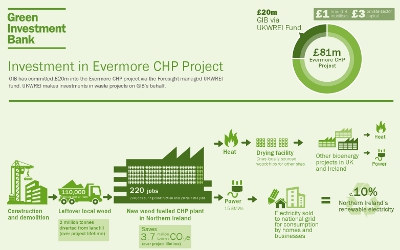 The Green Investment Bank is to provide à‚£20m towards an à‚£81m project in Derry, Northern Ireland, a wood-fuelled combined heat and power facility, known as the Evermore Renewable Energy plant.

The 15.8MWe plant will use over 2 million tonnes of wood from landfill and is set to increase renewable electricity generation in Northern Ireland by around 10 per cent.

Over its lifetime, the project is estimated to save around 3.7 million tonnes of CO2e emissions and produce enough electricity to supply the equivalent of more than 25,000 homes.

Foresight Group (Foresight) and the UK Green Investment Bank plc (GIB) are behind the plan to build the plant on a ten acre site at Derry Port and Harbour Commissioners land at Lisahally, in Northern Ireland, which will be operational in 2015.