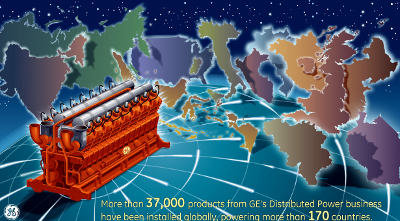 Chief Marketing Officer David Keefer explained to COSPP online some of the motivation behind why GE is investing $1.4bn into meeting the world’s need for on-site power.

Encapsulated by the slogan, ‘Start small, think big’ GE (NYSE: GE) believes there is a real and untapped potential for distributed generation. The company has merged three product lines -Aeroderivative Gas Turbines, Jenbacher Gas Engines and Waukesha Gas Engines to form GE Distributed Power—aimed at better serving the distributed power space.
From a purely pragmatic point of view the move makes sense, as Keefer (pictured) explains. “It’s much more efficient to combine them together from a commercial perspective and have a single salesforce up there trying to sell distributed power solutions and it’s also more efficient from an R&D perspective.”

But apart from the practical use of resources, the company has come to realise the real value the technology presents particularly in emerging markets, which has a lot to do with the launch of the business in Jakarta, the Indonesian capital a symbolic choice of GE’s intent.

First a brief summary of the expertise contained within the three strands that make up the newly amalgamated enterprise.

GE aero-derivatives deals with taking jet engines and repackaging them for power generation.

Then there is the 108-year-old Waukesha Gas Engines – based in Wisconsin, US whose focus has been on small reciprocating engines, particularly in the oil and gas space in the US.

Keefer (pictured) says the company came to realise that all three were niche businesses, “but we hadn’t really taken a step back and thought about distributed power as a whole. When we did, we discovered it was an enormous opportunity. We are only covering a sliver in a space that is as big as our heavy duty space.”

A recent white paper backs up the enthusiasm. The paper entitled, “The Rise of Distributed Power,” found that distributed power will grow 40 per cent faster than global electricity demand between now and 2020.

However emerging markets have historically been plagued by their inability to add large scale power stations, with financing a key factor at every stage.

“Actually it is a misconception that small scale power is inefficient or expensive not just when you consider all those factors (mentioned above). You can also commission these plants faster so you don’t lose all the economic activity that could have happened if you had power for those four years before your coal power plant was commissioned; there’s that accumulating economic benefit. You don’t have the line losses that you do with the large transmission. All of that put together makes distributed power really efficient for emerging markets.

If ever a country existed that was tailor made to demonstrate the potential of GE’s new business it’s the un-assembled jigsaw that is Indonesia’s geographical spread. The country has around a thousand inhabited islands.

GE has a concept they are pursuing called virtual pipeline, which takes from sister company GE Oil and Gas’s expertise in natural gas liquefaction and would entail providing small scale liquefaction plants-A single such plant can provide enough fuel to power 40 MW at baseload and is one of the myriad solutions Indonesia is looking to resolve its power issues.

“Indonesia is interested because they have so many remote islands that have all small power demands that can be served via marine transported liquefied gas. Even on Java there are small scale reserves that can be exploited to deliver gas to remote communities.

“There is a tremendous amount of latent demand as Indonesia as a whole is only 75 per cent electrified and some of the outlying islands are as little as 30 per cent electrified, so it’s a huge priority for them. They need it all – virtual pipeline, biomass gasification, coal – they really need to adapt to every form of power generation in order to meet what they forecast as an annual 5 GW of power demand growth.”


As part of this week’s announcements, GE signed a Memorandum of Understanding to produce a prototype 3 MW integrated biomass gasification unit. It is conceived that the standard design will have capability to process a range of woody biomass.

While not yet at demonstration stage, GE will look to achieve rapid growth once commercialised and spread around Indonesia.

With its new business now in place, GE is aiming to be at the forefront as distributed generation increases its proportion of the energy market and Keefer offers yet more reasons why optimism reigns.

“There are multiple drivers. As well as the fast power and economic benefits it presents in emerging markets you also have the ability to scale it up. So you can start with a 10 MW Jenbacher unit and then add to it over time, which makes financing so much easier.

“The other element which I think is very interesting is the increasing penetration of renewables. They are intermittent and one of the benefits of distributed power is that it can firm the grip when the wind isn’t blowing or the sun not shining. Our units, particularly the aeros are particularly fast start, and can cycle and flex at little or no additional cost for maintenance so it’s a very complementary technology with renewables.”

By synergising the expertise garnered from across all three businesses the company feels it has found a new edge with a full range offering that can cover many of the needs found in the combined heat and power (CHP) space for example. Personnel are on hand that understand the whole suite of applications and capabilities that can go into a CHP application, consider the whole portfolio and prescribe the most efficient configuration to adjust to the needs of the customer.

Keefer is enthusiastic about what CHP can offer in the current climate.

“One of the drivers for CHP is efficiency. A big change from ten years ago is the cost of natural gas and hydrocarbons so the value of efficiency has actually risen dramatically to the extent that you can go with distributed power and be able to benefit from the steam and hot water, use it in district heating or chilling and that you can get all the way up to 95 per cent efficiency or with a coal station up to a 35 per cent efficiency range. As distributed power is power generated at the point of consumption means that our customers can leverage the waste heat for a huge number of different uses.”

The range of products the company has at its disposal are also a significant draw.

That versatility will be needed as developing nations demand more and more capacity to meet the needs of growing economies, and something to preoccupy developed and developing nations alike – the need to get to grips with accompanying environmental obligations.