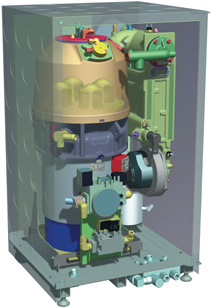 According to industry analysis from Edinburgh-based Delta-ee, fuel cells are now outselling engines as the most common technology employed in micro-CHP systems for the first time on record.

According to their analysis, until 2012, the global micro-CHP market was dominated by products powered by combustion engines but there has since been a shift.

Residential fuel cell now account for 64 per cent of global unit sales representing a doubling of this technology’s market share since 2011.

Delta-ee reported that it found that even in a harsh economic climate, 2012 ended up a landmark year for the global micro-CHP industry, with a large increase in total annual sales. This growth is being driven mainly by Japan and to a lesser extent Germany, which together account for more than 90 per cent of those yearly sales.

Further, changes in the political and regulatory landscape in Japan and Germany – both of which support a move towards decentralised energy generation – have been critical factors behind market growth.

The Scottish-based agency forecasts that if micro-CHP fulfils its potential, the manufacturers and developers in Japan and Germany will be best positioned to become the global leaders in the industry.