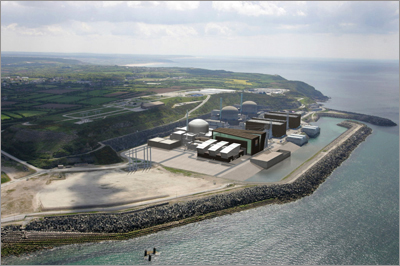 An explosion has been reported at unit 1 turbine hall of Flamanville nuclear power plant in northwest France.

The incident has been reported by local media, Ouest-France newspaper and M6 Radio station. These sources claim five people have suffered minor injuries as a result of the explosion.

A government official says there is no nuclear risk, and at midday EDF spokesperson Laurence Ollier, confirmed,à‚  “At 9.40 this morning, a fire resulting in a minor explosion broke out in the turbine hall on the non-nuclear part of unit 1 at the Flamanville nuclear power plant.”

“The fire was immediately brought under control by the plant’s response team. As per normal procedure, the fire brigade went to the affected location and confirmed that the fire had been extinguished.”

The Flamanville 1 and 2 reactors were built in the 1980s. A new reactor is being built at the site but the explosion is believed not to have taken place there. The nuclear safety authority ASN said it had no information and could not immediately comment.

“It is a significant technical event but it is not a nuclear accident” because the explosion occurred “outside the nuclear zone,” said Olivier Marmion, director of the state prefect’s office.

The newspaper added that the Special Plan of Action (PPI) was not triggered because there is an absence of any nuclear risk.

“Five people were slightly intoxicated but they are not injured,” added Marmion, who said at the time of the incident seven employees were on site.

While the incident is being dealt with, reactor 1 has been shut down and a safety perimeter has been installed by EDF.

“At 12:10 pm, the fire was contained in the engine room,” Marmion said, who added that “the fire may have been caused by a short-circuit issue.”