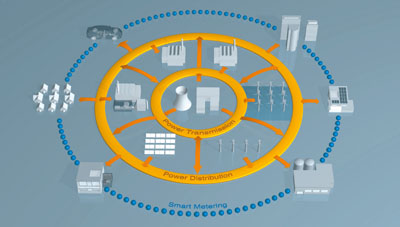 A German energy services provider is to implement and operate a ‘virtual power plant’ based on an energy management system from Siemens Smart Grid, the companies have announced.

North Rhine-Westphalia’s Mark-E plans to acquire the power capacities of smaller and medium-sized utilities, distributed energy resources and consumers and bundle their generating capacity. The aggregated power will then be marketed directly, as well as being offered in the form of balancing power via the appropriate trading platforms for system service. à‚

Siemens will make the required hardware plus its cloud-based Distributed Energy Management System (DEMS) portal available in a service centre that Mark-E will access via a user interface, the companies said. The DEMS manages all required system functions, they added, including communications interfaces for the distributed energy resources, supply forecasts and aggregation mechanisms. The capacities of the power plants can also be released for sale to Mark-E by their operators via a web portal.

“Virtual power plants are an important module in building smart grids, without which it would be impossible to implement the new energy policy,” said Jan Mrosik, CEO of Siemens Smart Grid. “Smart grids provide the only practical solution for integrating the growing number of distributed and renewable energy resources in the grid. With our cloud solution for virtual power plants, which we offer as a ‘managed service’, we make it easier for power suppliers and utilities to get into this promising technology.”

In a statement, Siemens explained that for virtual power plants with low overall capacity, the expense of establishing them combined with their operating costs often exceeds their economic benefit, but distributed energy resources can only participate in energy and balancing power markets if grouped together. In many such cases, small and medium-sized utilities have to forego using this technology altogether, and are unable to offer their customers who operate distributed energy resources adequate marketing options. According to Siemens, its new cloud-based service fills this gap. à‚