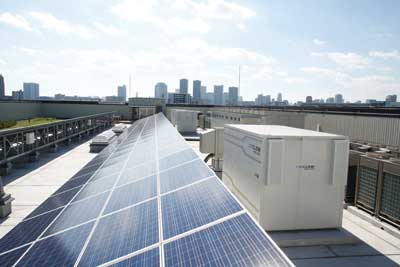 Although governments have been slow to recognize the potential for energy storage and what it can mean for grid infrastructure, it can play an important role in grid support. We spoke with Matt Cunningham of GE Power Conversion to discuss the present and future of energy storage.

European and global governments have been slow to recognize the potential for storage of electrical energy and what it can mean for grid infrastructure. We spoke with Matt Cunningham, sales director at GE Power Conversion, who told PEi that the potential of storage technologies is going unrealized due to “governments having no clear strategy”.

“Energy storage has a very useful place in the energy mix of different countries and grids,” he said. “To me energy storage is one of those tools that grid operators, owners, distributors and generator companies can use to maximize the efficiency, availability and stability of the grid and essentially lower energy costs for the end user. The consumer price is, you could argue, the key target along with high availability.”

Cunningham has outlined the cost savings that can be won through judicious use of the various storage technologies, and he is animated about the slowness in recognizing other advantages.

“When you start to look at renewable penetration,” he explained, “for example in the UK, there is a lot of onshore wind, there is growing offshore wind, and we are also seeing a lot of domestic renewables coming in, such as house-top solar photovoltaics and some small wind; these bring challenges to the different distribution and transmission levels and they manifest themselves with stability issues, where you see swings of power which affect frequency, and you therefore need some means of providing the infill power when necessary.

“There is a lot of investment in the world in energy storage, but at the moment there is no clear strategy by national governments to help energy storage and integration. It’s then left to the developers to promote the benefits and install the technologies.”

GE Power Conversion is hoping to use the case of Ireland as a means of demonstrating the positive attributes of storage technology to other European countries and beyond, as renewables continue to steadily grow their share of the power generation pie.

Cunningham’s reference is to the DF3 project, which looks at how to stabilize the Irish grid.

“Ireland wants to increase renewable power penetration from 50 per cent to 75 per cent. Because it’s an island, that is causing a lot of issues with the thermal generation in the country already and where they see availability and performance.

“So they are looking at alternatives to provide that support,” he continued, “and one of those supports could be energy storage. There was a recent round of consultation which we responded to, and we believe we have answers that could help support that grid. Other governments are waiting to see how Ireland gets on in this regard, as the problem is prevalent in other states.”

Governments are providing funding for initiatives in the space, but there appears to be an ongoing disconnect on the best means of proceeding, according to each individual state.

The UK has provided in the region of £80 million ($120 million) over the last two years in energy storage development, covering everything from domestic batteries to large liquid and compressed air energy storage systems. While there is undoubted interest, challenges remain.

“It’s harder for the industry to show the benefits to the regulators, the transmission system operators and the distribution network operators so that they see the need to include it in their long term strategy,” Cunningham says.

“Energy storage falls between gaps in historic and current understanding or in how it is compartmentalized. It’s not a renewable energy generation system; it’s not a prime mover. It draws energy and provides energy to the grid, so it’s both a user and a generator. It doesn’t fit into the boxes that people have set up. That’s a part of the issue: how to categorize energy storage.”

Clarity of definition would go some way toward enabling developers to see where a revenue mechanism and business case can be made. Then, much like deciding on an optimum national power generation mix, states must be educated on what storage fits their needs the best.

“If you are looking at the world perspective,” explains Cunningham, “there are places where energy prices fluctuate enormously depending on season, or perhaps political issues. In countries throughout Africa, Asia, South America, for example, that’s where you can create a better business case for energy storage systems – you can build energy storage to store energy when the price is low, and as soon as it peaks to a high level you can use that storage to reduce your overheads.

“Outside of Europe there is a lot of scope out there to support economies and communities where, over the 25-year lifetime of an energy storage unit, you can make some very good savings,” he adds.

Cunningham’s group is involved in all of the various storage technologies, including lithium-ion battery, flow battery, liquid compressed air and, increasingly, hybrid solutions, whether solar photovoltaics or wind, diesel or gas engine combinations.

Countries such as Saudi Arabia are alive to the potential with regard to solar PV power and energy storage in particular, storing energy during the day and using it at twilight and early evening.

“A lot depends on the fluctuation of prices for energy,” he says. “The wider the fluctuation, the easier it is to justify an arbitrage-type energy storage, where you are storing it and selling it or using it when your energy is high. If you are looking at PV and wind, the key problem with renewable penetration is stability. However, if there is hybrid-solution energy storage on these plants, then you have the means to gradually decrease the power, which gives your thermal plants or other resources time to build up. If it’s a cloud issue, which often just lasts five or six minutes, you have enough energy storage to last through that and there is no impact. It therefore helps the stability of the grid.”

He also points to “the capacity mechanism as a potential use for energy storage. You store 10 per cent of your plant rating, whether PV, wind or tidal, in your energy storage and you bid for that capacity market.”

Cunningham shows how these technologies evolve and contribute to the power sector. At the moment, electrical energy storage systems are relatively expensive because they are not manufactured in large numbers. However, there is a drive to get the cost down. He says the technologies can drop costs by another 25–40 per cent, becoming much more business-optimal in terms of price value.

“With small energy storage units such as flywheel, electrical or compressed air, costs will come down once the technology is deployed, optimizations will be made, and these hybrid solutions will help drive the costs down as you get power density up by taking out redundancy or needless volume. They will be a very key part of the future,” he says.

Although GE has no direct involvement, Cunningham says a new storage project in Leighton Buzzard in the UK, initiated in December 2014, will provide greater appreciation of storage’s role as DNOs are participating and their experience can help build positive momentum.

“We now have a lot more distributed generation from offshore wind and onshore wind, even home generation that is causing a lot of issues on how the national grid and distribution operators balance and stabilize the grid,” he says. “Energy storage will help that.”

Later this year GE is set to unveil storage projects outside Europe which will meet the high electricity price fluctuation criteria, and a gas generation-storage hybrid is expected to be the model announced.