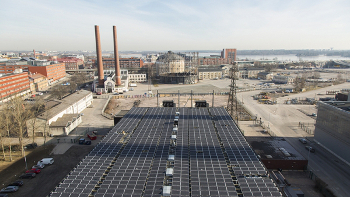 The Nordic region’s largest energy storage facility is to be built in Finland as part of a smart energy system in Helsinki’s Kalasatama district.

The 1.2 MW energy storage facility will comprise around 15,000 lithium-ion battery cells, which will store the power generated by the Suvilahti plant as well as the power from an additional 850 kWp solar power plant currently under construction in Helsinki’s Kivikko quarter.

The battery will be assembled in Italy at the beginning of 2016, and is planned to be installed in March of that year and commissioned shortly thereafter, the company said. The 12x2x2-metre installation will have an energy capacity of 600 kWh and will be built on a base without permanent foundations.

The €2m project is to receive 30 per cent funding from Finland’s Ministry of Employment and the Economy. Its aim is to test “flexible intermediate storage of electricity and new business models”, the company said.

Juha Karppinen, ‎Helen’s development manager for energy storage, electromobility and smart grid solutions, explained:  “The project’s greatest innovation is in the way the facility will be operated and controlled. We will study and test when it is worth charging and discharging the battery and who is prepared to pay for it at any given time and according to which logic.”

He added: “Its function is to balance the electricity supply. The benefits of this battery-operated electricity storage facility are its instant startup and easy controls. As an electricity reserve, it will support the grid in fault situations and take part in the compensation of reactive power.”

Partnering on the project are TSO Fingrid and transmission and distribution company Helen Sähköverkko. The battery technology will be delivered by smart metering firm Landis+Gyr in partnership with Toshiba.