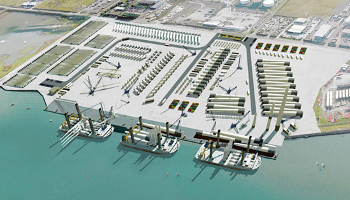 A new combined cycle gas-fired power plant planned for Northern Ireland could power half the province’s homes and businesses.

The claim was made by co-founder of development company Evermore whose proposal for a £280m gas-fired power plant goes before Belfast City Council for approval next week.
The city’s planning committee will evaluate the proposal designated for Belfast Harbour.

A new £280m power station – capable of powering up to half of Northern Ireland’s homes and businesses – is due to go before Belfast City Council’s planning committee next week.

Founder Ciaran Devine says the plant would take two and a half years to build, if granted approval by the Department for Infrastructure to build at Airport Road West in the Belfast Harbour estate.

The development could include an underground gas pipeline connection and above-ground gas installation.

Earlier this year, a Westminster committee reported that Northern Ireland will need more energy than can be supplied by 2021.