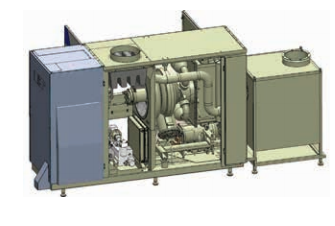 The worldwide market for microturbines is predicted to be worth $339.7 million by 2024, new analysis has found.

According to a market report from US-based Grand View Research, cost-effectiveness and the ability to use waste fuels have been major drivers for the adoption of microturbines around the world. Other factors include changing grid operations, environmental regulations and the growing global drive toward greener energy sources.

Combined heat and power (CHP) was found to be the leading application segment for microturbines, with over 55% of the total market revenue in 2015.

The 50 kW-250 kW power rating accounted for the highest revenue in 2015, garnering 38.3% of the total. The report predicted growth of 11% for this segment to 2024, noting that demand is likely to rise significantly due to increased use in hybrid electric vehicle manufacturing.

North America led the regional markets with 37.7% of global revenues. The region’s shale gas boom is expected to contribute significantly to microturbine sector growth in the near future, the report said.

In Europe, nuclear plant decommissioning and stricter environmental regulations are also expected to provide a boost.