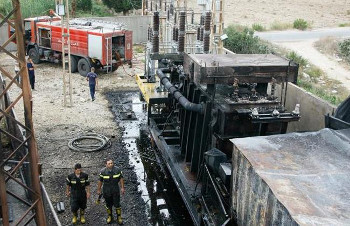 A power plant in Lebanon has burned down after lightning struck it on Sunday, resulting in a blackout in the southern part of the country.

The plant had supplied 50 villages with power and over 70 villages with water from a pumping station. Along with the blackout, those villages are now without water. The utility has brought two diesel generators online to operate two of the 50 water wells at the plant.

Repairs will take at least a month, officials said, due to extensive damage to the plant’s infrastructure. The Daily Star said this will lead to acute power and water shortages in southern Lebanon.

Meanwhile in neighbouring Syria, the US-led coalition against Islamic State (IS) has bombed the nation’s main gas plant, which is held by IS.

“The international coalition has for the first time struck the entrance and prayer area of the Coneco gas plant. It is under IS control, and is the largest in Syria,” said Rami Abdel Rahman, director of the UK-based Syrian Observatory for Human Rights.

“It appears as though the international coalition is trying to force the jihadists to leave the plant,” he said, adding that while no one was killed in the attack, there were injuries. The extent of damage to the plant was not reported.

The plant is located in eastern Syria’s Deir Ezzor province on the border with Iraq. Its gas is used by the 660 MW Jandar combined-cycle power station located in Homs province, which supplies the surrounding region including areas held by government forces. If the plant were to go offline, commentators said, both provinces could be without power.