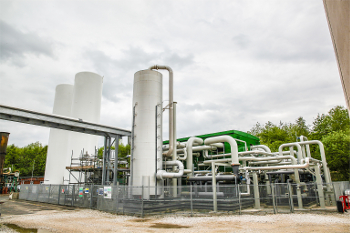 The system will instantly respond to grid frequency events, meeting the requirements of National Grid‘s Enhanced Frequency Response (EFR) service and Firm Frequency Response (FFR), enhancing the economic case for its adoption.
Highview is involved in the development of liquid air energy storage (LAES) systems, which offer flexible large-scale, long duration energy storage that is not reliant on specific geography; unlike for example, pumped hydro.  The hybrid system combines instant start and cost-effective long duration storage, broadening the range of services LAES can supply and making it a very competitive alternative to batteries.

As part of a new development phase, Siemens Large Drives was awarded a contract to deliver the short-term energy storage and power conversion system, utilising the Sinamics range of power converters.  These will provide almost instant start capability (under a second) to the plant at Pilsworth, and will enable the system to respond to National Grid’s service needs.

Gareth Brett, CEO of Highview, said: “The grid needs both flexible response and longer duration storage which a hybrid LAES system can provide.  Working closely with Highview’s engineers, Siemens has been able to quickly develop our concept into a packaged system which will help pave the way for broad deployment at large scale.”

Siemens is supplying water cooled Sinamics S120, Sinamics DCP (a new DC:DC converter), Simotics FD Energy flywheel motors and super-capacitor modules.  The Siemens technology, along with technology from other UK suppliers, will provide a short-term +/- 2MVA to the grid while the LAES system ramps up to power.

The first key phase of operation of this versatile energy storage and conversion system includes a closely controlled near-instant export of power to the grid during under-frequency events, while the LAES system ramps up to meet the output requirements.

The second phase includes a closely controlled near instant import of power from the grid during grid over-frequency events, where the electrical power is converted to heat and stored for later use by the LAES system.

The project provides a demonstration of the Sinamics range, with active front end technology providing very low harmonic import and export of power to the Grid, speed control of the flywheel motor to store/recover energy as kinetic energy in the rotating mass and DC-DC conversion to utilise the full voltage range of the super-capacitors, all while providing stable voltage to the S120 DC-link.  The complete system will be water cooled and supplied and tested fully integrated into a container offsite before arriving at Pilsworth in early 2018.

The Pilsworth LAES plant will be commissioned in early 2018 and the hybrid system is expected to be in full operation by summer 2018.