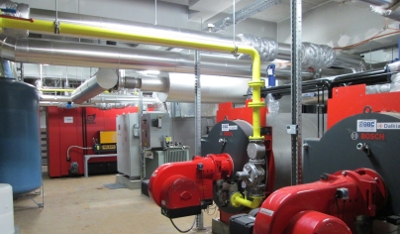 The University of Ghent has employed Dalkia to provide two 238 kWe combined heat and power plants aimed at supplying two of its campuses.

The energy management specialist will deploy the units to serve the Coupure and Ledeganck campuses at the Belgian university.

Once the CHP plants are fully installed and commissioned, lecture theatres, offices and campus facilities will be provided with electricity, heat and hot water generated from a single fuel source.

On each campus, a stoichiometric natural gas-fired CHP unit fitted with a three-way catalyst to reduce both Nox and CO to very low levels will produce electrical energy which is then sent to the University’s power grid to supply local users, while the heat that each CHP unit gives off during the electrical generation process is captured to provide heating and hot water.

As a result of this dual process, the new CHPs will offer a higher level of energy efficiency than power and heat supplied by conventional power plants. Crucially, the lower use of natural gas and the reuse of waste heat will both cut utilities cost and carbon emissions from the campuses’ energy plants.

Jonathan Wray, International Business Manager at Dalkia’s specialist CHP division, Cogenco, said are being installed and are set to be commissioned this spring, after which they will be serviced by Dalkia’s operations and maintenance engineers as part of a 15-year agreement.

“For a large energy consumer such as the University of Ghent a packaged CHP solution is a cost-effective, lower-carbon way of covering local energy demand and delivering CO2 reduction targets,” he said.