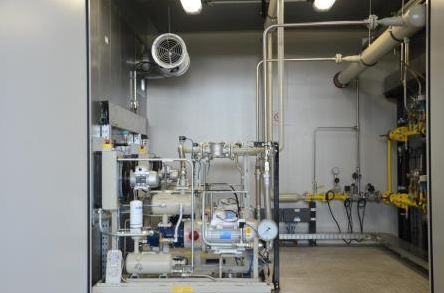 A new cogeneration plant using microturbines has been commissioned at one of Germany’s largest natural gas storage facilities.

According to power plant construction firm Max Streicher Anlagentechnik, which developed the solution, the storage area at Jemgum in northern Germany consists of subterranean caverns which can hold up to 1 bn cubic metres of natural gas. In order to properly store the gas underground, it must be compressed to up to 200 bar using gas turbine-driven compressors. The compressors release seal gases from their gaskets, and these gases are then collected and transferred to the microturbines rather than flared off, as was previously the case.

The cogeneration plant provides a more efficient use of seal gases by using them to generate power and heat, Streicher said. The recovered energy is then used on-site at the storage facility.

The cogen plant is located in a container which is 3.5 metres high and 12 metres long, and features two microturbines, the firm said. The unit was preassembled at Streicher’s workshop in February and delivered by special transport to the gas storage site in Jemgum, where it has been operational since April.