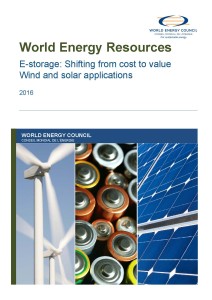 The value of energy storage may be widely misunderstood by the power sector, according to new analysis from the World Energy Council (WEC).

In a report (E-storage: Shifting from cost to value 2016) released this week in Abu Dhabi, the WEC said estimates of storage systems’ “true value” must focus on both cost and revenue benefits, rather than “a narrow focus on cost alone”. Looking only at the levelized cost of energy (LCOE), it said, fails to allow for differences in application cases and takes only limited account of the resulting revenues.

However, it noted that these revenue streams will vary over time and between countries due to variations in markets, policies and competing resources. à‚

Christoph Frei, WEC secretary general, said: “Too often the industry only talks about one half of the profit formula, namely cost. à¢€¦

“With the cost of capturing and storing wind and solar energy coming down, [storage] deployment across the world will increase,” he added. “The market is right to be enthusiastic about storage of energy, not just because of the cost reductions that it brings, but also because of additional revenue and other benefits that specific technologies in specific contexts can deliver.”

The report also predicts that, with many new technologies in the pipeline, the cost of storing energy will fall by as much as 70 per cent by 2030.