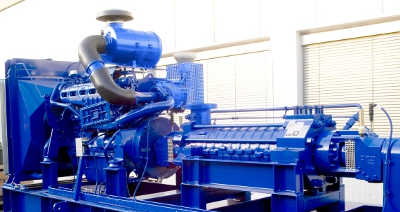 The 270 MW plant is being built by a Finnish corporate group approximately 20 kilometres east of Jakarta, and is specifically aimed at improving the energy supply for the region’s industrial base.
The order is for the supply of eight boiler feed pumps of which six will be driven by fixed speed 6000 V electric motors with a 2260 kW drive rating.

To adjust the speed to the varying pump output required, the pump sets have been designed with a turbo coupling between pump and motor. The flow rate of each unit will be around 270 cubic metres per hour. The designed head is approximately 1960 metres and the temperature of the fluid handled 160 degrees Celsius.

The scope of supply also includes two stand-by feed pumps driven by two twelve-cylinder MTU diesel engines, each with a 668 kW drive rating. They will keep the power station in operation in the event of a power failure.

KSB has successfully implemented several other projects around the world jointly with the Finnish corporate group. The project is expected to be completed in 2016.