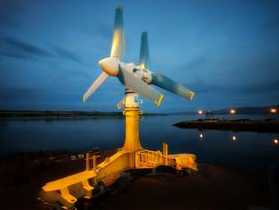 The Meygen power facility, the world’s largest tidal power project, believes it has the capability to reduce costs and secure vital funding in the process.

Atlantis Resouces, the developers of the plant, say “dramatic reductions” in costs can be gained by using a different type of foundation that required less steel and by increasing turbine sizes.

The Times reports that the company installed four turbines on the seabed between the northern Scottish mainland and the island of Stroma. It hopes to expand the project, known as Meygen, eventually to build 260 such machines, which it likens to “underwater windmills”, harnessing some of the fastest-flowing waters in Britain to generate up to 398 MW of electricity, enough to power 175,000 homes.

The renewables obligation scheme that is providing consumer-funded subsidies for the first four turbines is shutting at the end of this month, however, casting doubt over the project’s future funding.

Under the government’s replacement system, technologies such as tidal, wave and floating offshore wind will no longer be guaranteed high levels of support. Instead, they will compete against offshore wind farms, a technology that is far more established and cheaper.

Tim Cornelius, chief executive of Atlantis Resources, said he was “confident” that Meygen could compete “on a par with offshore wind” in a subsidy auction this summer, when it would seek support for up to 76 MW, or about 50 turbines.

The first four Meygen turbines are due to receive subsidies of about £200 per megawatt-hour via the renewables obligation scheme, on top of wholesale prices that are about £45 per megawatt-hour. In the forthcoming subsidy auction, offshore wind prices, against which Meygen must compete, have been capped at £105 per megawatt-hour in total.

A government spokesman said that its new subsidy system was designed to secure “the most efficient projects . . . at the best value for money to bill-payers”.