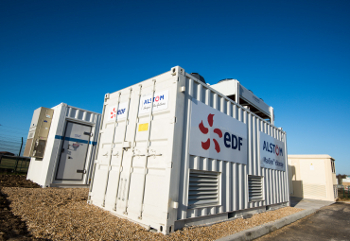 The project is led by Electricité de France (EDF) and the objective is to test battery storage in real conditions, thanks to its Concept Grid platform, for the purpose of frequency regulation in mainland France, stabilising the grid and preventing blackouts. Concept Grid, located on EDF’s research site at Les Renardières, south of Paris (Seine-et-Marne region), is a real distribution network that is designed to support, test and anticipate the development of electrical systems towards smarter grids.

This contract to install a 1 MW per 30 minutes BESS was signed last year. The system consists of Alstom‘s MaxSineTM eStorage smart converter and Saft’s Intensium® Max 20 lithium-ion battery. It converts electricity between direct and alternating current that can be stored or released into the grid. The real-time energy storage management software allows electricity production to be optimised according to grid needs. Specific EDF algorithms have been implemented inside Alstom’s software in order to develop and test the frequency regulation with a storage system.

The system provides producers and grid operators with a new possibility for releasing or storing energy into the grid when there is an imbalance between energy production and consumption. This is a more flexible solution than frequency regulation via power plants allowing optimisation of the power plants’ generation by valuing their unused reserve capacity. These experiments by EDF will evaluate the ability of the storage system to regulate frequency. This system can also address integration of renewables and maintain grid stability. The storage system performs these actions within a few hundred milliseconds which is a real value for small grids.

This project represents yet another successful collaboration between Alstom and Saft, following the Nice Grid smart solar city demonstration project in Nice, France in late 2013. The 2013 partnership saw the successful commissioning of a 1 MW BESS for peak demand management with the integration of intermittent solar energy.