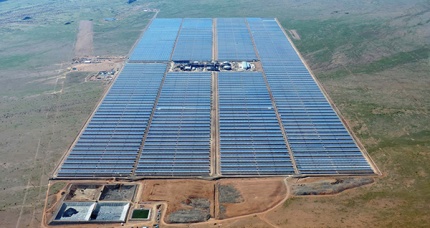 The financing agreements involve loans from several institutions including the African Development Bank, the International Finance Corporation and the Development Bank of Southern Africa.

The 100 MW Xina Solar One facility is being developed close to Pofadder, in the Northern Cape Province, next to Abengoa’s existing 100 MW Kaxu Solar One (pictured), the first solar thermal plant in commercial operation in South Africa.

With a total investment of around $880m, construction of Xina Solar One started last year. It will be owned by a consortium in which Abengoa controls 40 per cent. The other consortium members are IDC, PIC, and KaXu Community Trust.

Xina Solar One has a parabolic-trough design and a five-hour thermal energy storage system using molten salts. It will supply electricity to South African utility Eskom under a 20-year power purchase agreement.

The Xina and Kaxu projects were awarded by the Department of Energy of South Africa under its independent power producer programme.

The International Finance Corporation is providing a $37m loan to finance Xina Solar One.

IFC country manager Saleem Karimjee said: “Solving the power issue is an urgent priority in South Africa, and establishing the country as a leader in renewable energy production is an important long-term goal. This project draws on South Africa’s abundant sunshine to address both these issues.”