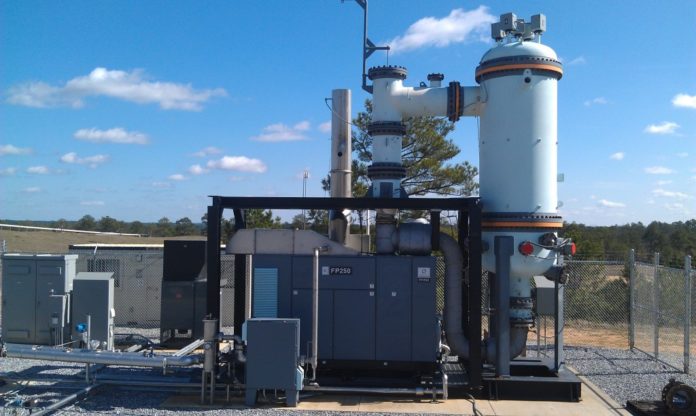 Dresser-Rand, a Siemens Business, and Ener-Core (OTCQB: ENCR) have made progress with scaling-up Ener-Core’s Power Oxidizer, a technology that converts normally unusable waste gas into a viable fuel for generating electricity and without the need to spend money on additional natural gas.

The technology, which significantly reduces volatile organic compounds released into the atmosphere, has now been scaled up to a 2 MW version, while being integrated with Dresser-Rand’s KG2-3G gas turbine technology.à‚

The successful completion of various tests has made it possible to move forward with the production of two integrated 2 MW KG2 gas turbines incorporating Power Oxidizers, which will be installed at Pacific Ethanol’s plant inà‚ Stockton, California.

By replacing a gas turbine’s traditional combustor with Power Oxidation technology, low-quality and previously unusable waste gases that are currently flared into the atmosphere can be converted into heat that can be used to generate low-cost on-site clean power and steam.à‚

Combined with Ener-Core’s Power Oxidizer, and based on test results performed by third parties on a smaller gas turbine, both Dresser-Rand and Ener-Core are expecting similar and dramatic improvements in NOx emissions with no post-exhaust treatment.

In late 2014, Ener-Core entered into a global licensing agreement with Dresser-Rand to develop and market Dresser-Rand‘s KG2-3G 2 MW gas turbine coupled with its Power Oxidizer.

Dresser-Rand offers some of the most efficient and environmentally friendly technology platforms, products and services in distributed power generation for oil and gas, industrial, institutional and commercial clients and rural electrification programs.