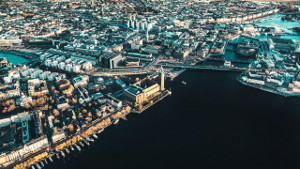 Stockholm plans to heat 10 per cent of its homes using waste heat from data centres, according to an initiative launched this week.

The Stockholm Data Parks scheme pipes in cold water to chill server banks, then distributes the warmed water for use elsewhere.

GCR News reports that the plan is to turn the city into a hub for large data centres, and to offer all the infrastructure elements necessary for heat recovery at greenfield sites.

Almost 90% of buildings in Stockholm are already connected to district heating networks, making it one of the few cities in the world where large-scale heat reuse from data centres is possible.

Firms using the initiative will get free water for cooling by Fortum Vàƒ¤rme and will also be able to sell their waste heat.

A new data centre for retailer H&M is designed to handle a 1 MW IT load and could heat as many as 2,500 apartments. A planned data centre project by IT and telecom firm Borderlight will run at more than 5 MW and can provide heat to 10,000 units.

It was announced earlier this year that what will be the world’s largest data centre is planned for the Arctic Circle in Norway, where the cold climate and hydro power will providing natural cooling and energy for its servers.