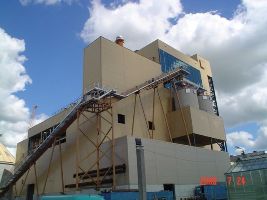 Finnish utility giant Fortum Oyj (FUM1V:HE) has agreed to acquire the district heating operations in the Estonian city of Tartu from Erakàƒ¼te, a domestic district heat company, for a price tag of EUR7m ($9m).

The district heating network accounts for approximately 20 per cent of the whole Tartu network, and in 2012, heat sales in the area totalled 92 GWh.

The heat is produced by three boiler houses using local biomass and natural gas as fuel.

Once the acquisition is completed, which is expected in August pending the Estonian competition authority’s approval, Fortum will own the whole district heating network of Tartu.

Subsequently, Fortum plans to connect the new network area to its current network that is supplied by its Tartu combined heat and power (CHP) plant (pictured), which is fuelled by local biomass and peat.