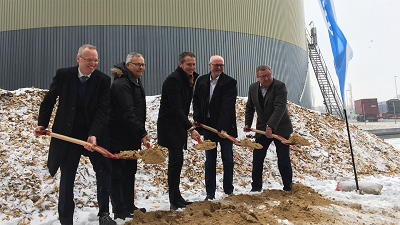 Ørsted is set to upgrade a biomass-fired district heating plant in Denmark after breaking ground on the project this week.

After its conversion, the 88 MWe/171 MJ/s Herning Power Station is planned to supply the same amount of heat for three municipalities – enough for around 48,000 households – while reducing its consumption of wood chips and pellets by around 20 per cent.

The project represents an investment of around DKK200m ($33m) and is expected to be finished by 2019.

Ørsted said the upgrade will include a flue gas condensation plant that will exploit the residual heat in the flue, making the plant more efficient. A new building will be built to house the plant as well as installation of the mechanical components required to draw energy from the flue before it’s discharged from the stack, the firm added.

In addition, the company said the plant will be able to supply heat without having to produce power, which could be useful when solar and wind energy generate enough power to cover consumption.

Ørsted also announced that it has signed a 15-year agreement with utilities Eniig Varme, Energi Ikast Varme and Sunds Vand og Varme for the supply of district heating from the Herning plant.

Thomas Dalsgaard, Ørsted’s executive vice-president and CEO of Bioenergy & Thermal Power, said it was “really good news for our climate that we join forces with our heat customers to make Herning Power Station even more efficient. It’s already a green power station running on sustainable biomass, and now we’ll be able to reduce the fuel consumption significantly, thus ensuring that the power station is a competitive alternative to fossil fuels.”

And Erling Vendelbo Klemmensen, head of the Heat Division at Eniig Varme, said he was “convinced that in future, it’ll become even more attractive to be a district heating customer in Herning. We can see that district heating to a much wider extent than before is becoming the preferred choice for clients when deciding on which type of heating to instal in new buildings. Customers are very conscious about choosing a greener profile, and here district heating is a cost-effective solution compared to other types of heating.”