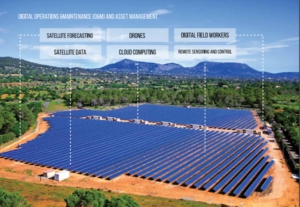 Trade group SolarPower Europe says its report, titled Digitalization & Solar and published this week, is the first to examine the intersection of solar PV and digitalization and to look at how new digital technology can be applied to the solar sector.

Big data analytics, the internet of things, robotics and blockchain are among the digital technologies the report found can create new solar business models and improve existing ones.

In the new business models category, digital technologies could allow residential and commercial PV system installers to offer solar energy as a service, with new products such as aggregation services based on remote controllability, sensor-based operation & maintenance services for smaller-scale installations, energy audits based on consumption data, and new kinds of financing such as smart meter-based ‘zero-down’ power purchase agreements. In addition, blockchain technology can enable peer-to-peer solar trading.

Digitalization could also reduce costs and improve performance along the solar value chain, the report found. Connected robotic manufacturing facilities and advanced data analytics can improve workflows, while advanced monitoring technology could reduce the risk of exposure to the chemicals used in PV manufacturing. The report also noted that 3D printing could be used to manufacture both spare parts and whole modules, although it is not currently in use in the solar sector.

In project development, digital technologies could reduce costs through using satellite imaging, 3D LiDAR and remote design software to assess a site’s solar potential rather than sending an engineer. Non-engineers could also use software to design and optimize PV installations, further reducing costs.

Digitalization is also expected to help integrate growing amounts of solar power onto Europe’s grids, with big data and cloud analytics allowing for better supply and demand matching. According to the International Energy Agency, smart grids with digitally enabled demand response and additional energy storage could potentially reduce PV and wind curtailment across Europe from the current 7 per cent to 1.6 per cent by 2040.

In addition, data exchange between PV providers and transmission system operators (TSOs) could create a new revenue stream for aggregators and could reduce costs for the TSOs.

Professor Bernd Engel, leader of the SolarPower Europe Digitalization Task Force and representative of the SMA Solar Technology Board for grid integration, said digitalization represnts “a major opportunity for solar, not least because it is a means of integrating more PV into the grid, gaining system-wide benefits and new revenues for solar installations.”