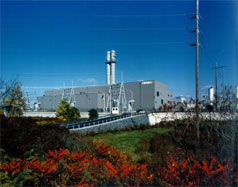 A US cogeneration plant is threatened with shutdown due to leasing issues.

The 345-MW gas-fired Selkirk Cogen plant in Bethlehem, New York could be mothballed in early September if its owners, Selkirk Cogen Partners, fail to negotiate a new land lease.

The partnership has filed a notice with the New York Public Service Commission regarding the potential shutdown. Selkirk Cogen Partners told local paper the Albany Times-Union that the filing is required by the state to warn regulators that the plant may have to be shut if a new lease cannot be negotiated.

The partnership includes power generation firm Atlantic Power, which owns 18.5% of the plant, as well as the Energy Investors Fund, Osaka Gas and the McNair Group.

The combined-cycle plant came online in two phases, in 1992 and 1994. The output of Unit 1 is sold on New York’s energy market, while the 265 MW from Unit II is sold to electricity company Consolidated Edison. Steam from the plant supplies the nearby SABIC Innovative Plastics manufacturing facility.