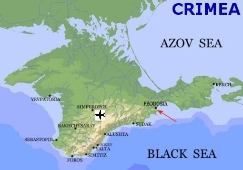 Two of three combined heat and power plants that had suffered from malfunctions before Christmas have been restored to full capacity.

ITAR-Tass news reports the deputy chairman of the KrymTETs company Taras Tsely as saying that “Saki and Kamysh-Burunskaya plants are currently working at full capacity.”

While Saki and Kamysh-Burunskaya (Kerch) combined heat and power plants are back in operational mode, repair work at the Simferopol plant à¢€”à‚ one of Crimea’s largest à¢€”à‚ currently continues.

“Overall, we produce some 130 MW of electric power (general data on the KrymTETs company). For Crimea today, each megawatt is as good as gold. The Simferopol CHP plant stands idle now, and it is really a great loss for the Republic of Crimea,” Tsely added.