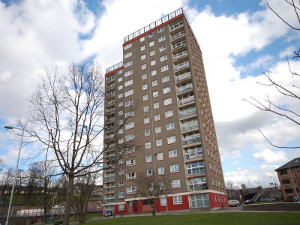 Council developers of Dalmuir High Rise flats, located in West Dunbartonshire in Scotland, have considered and rejected plans to install a combined heat and power system for the building (pictured).

According to media reports, Councillor David McBride said the local authority had considered such a development too expensive, saying: ‘The Dalmuir multi-storey blocks have had a huge investment including new external cladding and windows, close upgrade and 24/7 CCTV coverage. CHP was considered but could not be progressed. This was because of the layout of the site, its proximity to the railway line, the initial capital costs and ongoing running costs, together with the limited availability of external funding. In fact, grants for such schemes are far lower than previous years due to reduced government targets, however we will always seek any grants available to assist our tenants.’

However, Daniel Lennie, chairman of Dalmuir Multi-storey Flats Residents Association, rejected such suggestions, reportedly saying: ‘Everyone says fuel poverty is so bad but here we have again politicians saying we are not going to do anything about it.’