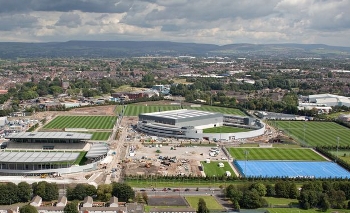 Manchester City Football Club’s new £200m training ground is consuming so much energy that the club’s owners are considering building their own power plant to run it.

The Etihad Campus training ground in Manchester is currently the subject of talks on its energy options according to a report in the Sun on Sunday newspaper.

The Premier League holders are in discussions to construct a sub-station nearby their state-of-the-art training ground. The 200-acre site, which opened last year , already uses so much energy that City have installed an energy centre.

Council bosses are now in talks with the club as they continue developments to the East Manchester site.

A source told the Sun on Sunday: “The club expects to use a lot of power and the council does not want it draining the local supply. And it looks like the locals might get some cheaper energy too, so everyone’s a winner.

It’s not the first football team to considering off-grid power for its training facilities, as Newcastle United are also considering the use of CHP for their own training grounds.