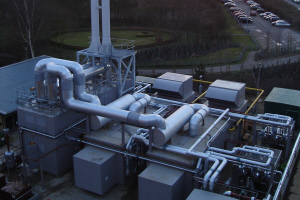 UK energy firm ENER-G has released its annual carbon reduction report showing that in 2014 its CHP customers ” which include Glaxo SmithKline (CHP installation pictured); Adams Foods; David Lloyd Leisure; Tesco; Sainsbury’s; and the NHS among others – reduced their carbon footprint by a total of 371,578 tonnes.

CHP achievesà‚ cost savings of up toà‚ 40% over electricity sourced from the grid and heat generated by on-site boilers.à‚ Typical payback on technology is between three and five years, with most CHPs having a product lifecycle of 15 years or more, the company says.

Heather Foster, Corporate Account Manager for ENER-G Combined Power, said: ‘At a time of high energy bills, those organisations using combined heat and power are saving money as well as reducing their carbon footprint. By generating their own secure supply of heat and power, they can also protect themselves from power outages and the disruption caused by network failures.’