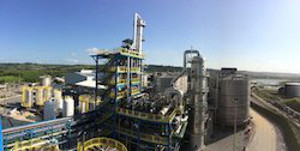 A new bioethanol production plant that has been commissioned in Brazil is helping to fuel an adjacent cogeneration facility that supplies process steam, as well as electricity to the grid.

Granbio has begun producing cellulosic ethanol at its Bioflex 1 unit (pictured) located in São Miguel dos Campos, in Alagoas. The company’s first commercial-scale plant for second-generation (2G) ethanol, it has an initial production capacity of 82 million litres of ethanol per year.

In addition, GranBio and Caeté have created a partnership for the integrated production of steam and electricity. Installed next to Bioflex 1, the cogeneration system is fed by sugarcane bagasse and lignin – a byproduct of producing second-generation ethanol. The boiler of the cogeneration system will remain in operation for eleven months of the year, or 8000 hours, in the harvest and inter-harvest period at the Caeté plant. Beyond meeting the needs of the two plants, the boiler will generate excess electricity of order of 135 GWh/year which will be sold.

GranBio claims its 2G ethanol makes it possible to increase Brazilian production capacity per acre by 50% using agricultural waste such as straw and bagasse. The company says it developed a system to harvest, store and process 400,000 metric tons of straw per year for Bioflex 1 using the PROESA pre-treatment technology from the Italian company BetaRenewables, enzymes from Novozymes in Denmark and yeast from DSM in Holland.

According to GranBio, its 2G ethanol is the cleanest fuel produced on a commercial scale in the world in carbon intensity – 7.55 gCO2/MJ, as confirmed by the California Air Resources Board (CARB). The calculation takes into account factors starting with the harvest of the raw material, through inputs and energy consumption, transportation and distribution through a port in California.