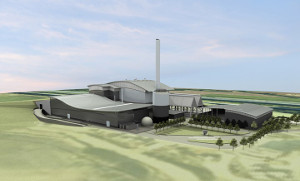 A new energy from waste (EfW)plant to be located in North Yorkshire in the UK has won the backing of the Green Investment Bank (GIB) with a à‚£33 million investment.

The project is expected to process up to 320,000 tonnes of household, commercial and industrial waste per year, divert more than 7 million tonnes of waste from landfill over its lifetime.

Being developed by North Yorkshire County Council and City of York Council alongside sponsors AmeyCespa, Aberdeen UK Infrastructure Partners (a fund managed by Aberdeen Asset Management) and Equitix, the plant will generate some 203 GWh of electricity per year.à‚  In addition, an onsite anaerobic digestion plant to treat organic waste will generate around 8 GWh per year.

The new facility in Allerton, between Harrogate and York, will be constructed at an existing landfill and quarry site by contractor AmeyCespa, which will also operate the plant on completion. The project will also reportedly have the capability to be reconfigured to combined heat and power (CHP) ‘if a suitable market can be established’.

GIB will provide long-term loan financing and an equity bridge loan alongside Nord/LB, Sumitomo Mitsui Banking Corporation, Siemens Bank, KfW-IPEX and the European Investment Bank (EIB).à‚  This is the first joint-investment between GIB and EIB. The councils secured a combined investment of more than à‚£183 million towards the proposed project with the EIB providing à‚£150 million. The total project value is à‚£319.5 million.