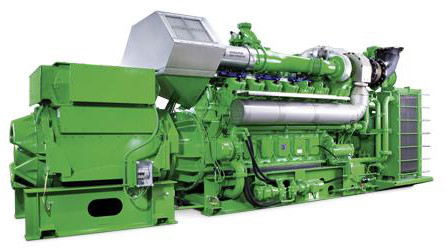 In answer to the perpetual question “Is it all about efficiency?” for reciprocating engines, Tuesday morning’s International Council on Combustion Engines (CIMAC) panel discussion at POWER-GEN Europe largely answered “Yes” – but perhaps, the participants agreed, it’s also about several other important factors.

Moderator Patrick Frigge of GE Power & Water noted that while, in a lower gas price scenario, aeroderivative turbines with lower efficiency can show a better levelized cost of energy and a more beneficial capital advantage, with high gas prices engines “can really shine”.  And, in the latter scenario, efficiency is key. Piston engines possess state-of-the-art features that promote efficiency and renewables balancing, Frigge said, and “it’s pretty clear” that high efficiency will continue to be a key concern “now and in the future”, with other forthcoming developments including making gas engine power plants more modular, standardized, easily transportable and quicker to install.

“So is it all about efficiency? Indeed, yes it is,” he concluded, noting for the audience that “this is maybe not what you expected” – but added that “it’s about flexibility too”. In closing, he referred to the “victory path of engines toward gas turbines” and noted that combined heat and power (CHP) installations below 200 MW “is where our engines will have a great future” and “are already displacing some of the aero gas turbines”.

Christian Hutholm of Wartsila said he’d like to “challenge Patrick a bit”, saying that “efficiency is one key, but not the key anymore” given that, for example, “in Germany we have some of the most efficient [gas-fired] plants being mothballed” and “the power plants we need today also need a lot of other abilities”.

Reciprocating engines have “features that are valuable”: they’re capable of fast starts and stops; they can quickly take on load when necessary; they can be used for load following – “we’re seeing this a lot in the US,” he said, where engines are being used for load balancing. Low-load operation is important to provide non-spinning reserves and even secondary reserves, he noted.

In a really flexible market, Hutholm asked, “what are engines actually worth?” As an example of such a market he cited the southern US, where the Southwest Power Pool is “working well”. In such a hot climate, where engines run at high temperatures, an engine can bring in $500,000 in revenue per year, with another $5m “if you can push open-cycle efficiency” and an added $3.5m per year if a plant is able to run with better efficiency at part loads and thus can sell more ancillary services. With fast starts and without startup costs, $4m per year can be gained through selling more energy, with the ability to start in five minutes generating another $1.7m. The grand total in savings, Hutholm said, is around $15m per year: “That is the value of flexibility”. And while critics will say that it’s not possible to build a plant of the necessary size in order to gain these savings, Hutholm said, he showed a picture of an existing plant and concluded: “Here is one of ours. I rest my case.”

In answer to the question of whether the era of single-stage turbocharging “is really over,” Markus Kahi of ABB answered a resounding “No!”, noting that there is still a role to be played in balancing power and peak shaving applications. In fact, while “the future is two-stage” for customers with a focus on environment, total energy and efficiency, because there are also customers with a strong focus on CAPEX and simplicity “we will see a differentiation in the market,” he said; “single-stage is not just dropping away tomorrow”. The market, he said, will consist of “different systems for different requirements on the customer side”, and it will be “a long time ramping up” to the two-stage future.

Caterpillar’s Wilhelm Mueller asked, “What is gas and how can we use it profitably?” While gas engines can switch off within seconds to deal with overproduction from renewables, as has been seen in Germany, and can start up in under a minute if the clouds come out or the wind dies down, the German grid is still left with the question of what to do with the excess power from renewables. One approach, said Mueller, is to “use the overproduction as a big form of energy storage”, fed to the grid when needed. Hydrogen can also be produced and stored, and fed to the gas grid. In the end, Mueller said, a mixture of hydrogen and gas would be available for later use.

He listed economic efficiency first in a list of key aspects for gas engine development, followed by increased engine efficiency, increased power output, reduced emissions/noise, and reliability. “Gas engine modification has to fulfil the requirements of flexible plant operation,” he said, and engines also have to operate with varying gas qualities – a future open gas market will influence quality – and optimize control strategies for safe operation.

On the policy front, Klaus Poepsel of Rolls-Royce asked whether upcoming European rules and directives “are promoting or prohibiting piston engines”. Focusing on the Medium Combustion Plant (MCP) directive for plants of 1-50 MW, he noted that while the law establishes mandatory baseline emissions limits for new plants at the EU level, each member state must translate it into national law, with the result that “27 states can have different rules”. As a consequence, he said, “the text of the MCP does not ensure common products for Europe”. Every country “is doing something different”, he added, and “some states today have stronger limits than the MCP is requesting for 2018. We know that every member state will do their own thing,” he said, which means that “the European internal market is gone”.

“If every country will take the MCP in its original form, we get a European market,” he continued, “but ministries of every country are not willing to do that”. In his personal opinion, he said, it “will not happen” and thus, in his company, “we prepare ourselves to offer, in every country in Europe, totally different solutions”. He concluded: “This was a story of an EU directive which didn’t help anyone – not the environment, and not our business.”