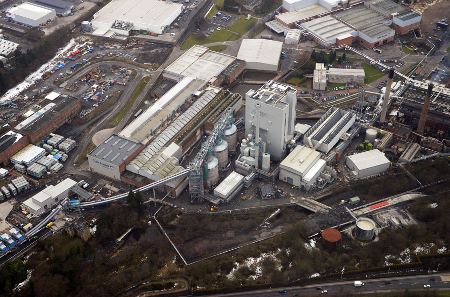 A Scottish paper mill is now getting power and steam from an on-site, waste wood-burning biomass combined heat and power plant.

The Tullis Russell paper mill in Markinch, Fife previously received its power from a nearby 60-year-old coal plant, which is currently being decommissioned.

The paper mill now gets 17 MW of electricity and 120 tonnes of industrial steam per hour from RWE Innogy’s new 65 MW, à‚£200 million (US$332 million) biomass CHP plant, the largest of its kind in the UK. à‚

The plant is expected to burn between 400,000 and 425,000 tonnes of fuel, largely waste wood, per year. The 10% that comes from virgin material will be sourced from sustainably managed forests, RWE Innogy said. Use of wood fuel is expected to reduce the mill’s carbon emissions by 250,000 tonnes per year.

In late February plant staff and community members met to discuss concerns that the waste wood fuel could contain contaminants. According to local paper Fife Today, Lorna Ross of the Markinch Environmental Action Group said some issues had been addressed at the meeting but a number of others, such as light and noise pollution, are still to be discussed. à‚