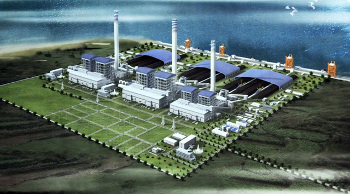 Vietnam is going ahead with plans to build a new coal-fired power plant despite experts’ warnings over the nation’s coal depletion and the dangers of depending on imported fuel.

The 1200 MW unit 2 of the 4400 MW supercritical Long Phu plant (pictured, artist’s rendition) is to be built in Soc Trang province by India’s Tata Power, which will develop the project under a build-operate-transfer model. At a cost of $1.8bn, it will represent India’s largest investment in Vietnam to date.

The plant is planned to come online in 2019 and, according to Tata Power, is expected to run on coal shipped in from Indonesia or Australia.

Energy analyst Dr Nguyen Tien Chinh has advised that Vietnam is taking a risk in setting up new thermal power plants without clear sources of coal supply, news outlet Vietnam.net reports. The nation’s domestic coal production has been falling below government targets, and in August the government announced that it would consider adjusting its plan for coal imports to begin earlier and import more. Vietnam Energy Association chair Tran Viet Ngai said at the time that the nation would likely begin importing coal in early 2015, two years ahead of schedule.

“It’s not easy for Vietnam to increase its coal output now, given that production cost is higher while there hasn’t been sufficient investment in the coal mining sector,” Ngai said in an interview with the Wall Street Journal. “We now have to dig deeper to get coal and importing is inevitable.”

But Chinh said it is unclear how much coal can be provided by other countries, and for how many years into the future.à‚  In a recent report, the Vietnam Coal and Mineral Industries Group (Vinacoal) said the nation will need to import several million tonnes of coal per year from 2016 in order to run its existing thermal power plants, with the amount rising to 20-30 million tonnes by 2020.

The government’s long-term energy plan includes building 57 new coal-fired power plants, with a total capacity of 36 GW expected by 2020 and 75.7 GW, or 56 per cent of the country’s power output, expected by 2030.

According to the Asian Development Bank, Vietnam’s power demand is expected to grow by 14 per cent per year to 2015, and by 11 per cent per year from 2016-2020. Coal will almost certainly remain the country’s dominant source of power, as other fuels are either nearly tapped out (hydropower), nascent (other renewable energy sources), longer-term investments (nuclear ” the nation’s first nuclear power plant is expected to come online in 2023) or tied up in disputes (Vietnam’s significant gas reserves).