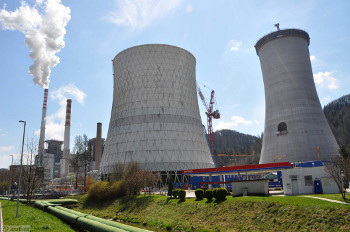 Unit 6 of Slovenia‘s 779 MW coal-fired à… oà…¡tanj power plant has been brought to full load, developer Alstom has announced. Despite the achievement, an investigation is continuing into the contracts involved in the development.

The 545.5 MW Unit 6 was connected to the Slovenian grid last month. When fully operational, the plant (pictured) will generate around one third of Slovenia’s power. It also supplies around 400 GWh per year of district heating to the à… aleà…¡ka valley.

“We are all extremely proud of this major achievement,” said Jéràƒ´me Poupon, à… oà…¡tanj Project Director. “Bringing Unit 6 to 600 MW is the result of five years of hard work in close collaboration with our customer [Termoelektrarna à… oà…¡tanj] TEà… . Compared to the existing units, unit 6 will increase the net efficiency from 30 per cent to 43 per cent. At the same time, CO2 emissions will be reduced by 20 per cent; SOx and NOx emissions by approximately 50 per cent”.

The à… oà…¡tanj plant has been mired in controversy, with a district court judge last week ordering a 30-day detention for its former boss, Uroà…¡ Rotnik, on suspicion of money laundering and Peter Dermol, the plant’s former director, reportedly dismissed by state-owned utility Holding Slovenske Electrarne (HSE) for incompetence. The project has been under investigation for four years, with bribery suspected in the award of the unit 6 contract.