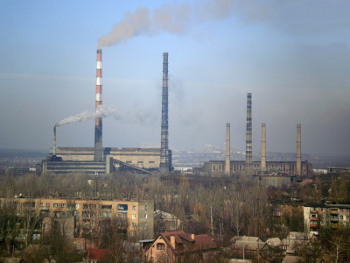 A Ukrainian power plant is reportedly facing a critical fuel supply situation due to military operations in the east of the country.

The plant, which produces around 28 per cent of Donbasenergo’s total power output, is located in a fiercely contested zone in the Ukrainian conflict.

On 19 June the railway by which the plant receives fuel supplies was damaged by pro-Russian separatists reportedly aiming to stop the plant and disconnect it from the grid. At the time Donbasenergo reported a coal stockpile of 51,500 tonnes. The plant uses up to 3500 tonnes of coal per day for a power output of 7.8 GWh.

If unable to source a new coal supply, Donbasenergo said, it planned to switch to a smaller power unit, cutting daily coal use to 420 tonnes.

Alexander Paraschiy, an analyst with Concorde Capital, said in a web post that “The shift to a smaller power unit indicates Donbasenergo’s management does not expect any de-escalation of the conflict in the vicinity of Sloviansk in the near term that would enable the restoration of a railway connection to coal sources. We estimate that at current rates of coal use, the Sloviansk [plant] can work on its stored coal for about 100 days.”

Paraschiy cautioned that energy holding company DTEK’s Luhansk thermal power plant, located near the town of Shchastia, is also at risk of attack. He said that “all the region’s power plants have nearly equal risk of technical failure from possible attacks on the region’s energy infrastructure. These reports indicate that the longer the war continues, the more risk for real damage to infrastructure in the Donbas region and stoppage of all its enterprises.”

Early reports today from news agency ITAR-TASS indicate that the Sloviansk plant may now have been damaged in artillery shelling by the Ukrainian military.